According to new research, there are over 1,000 star systems where aliens, if they exist, could be watching us from afar. 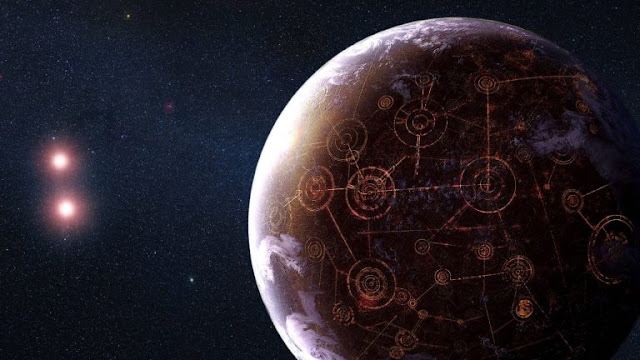 Those 1,004 star systems are in clear view of our planet and close enough to detect not just the planet Earth, but also chemical traces of Earthly life.

Astronomers have discovered exoplanets orbiting distant stars during the last decade by following a simple formula: keep an eye on a star and wait for it to suddenly dim. That dimming is a sign of a planet passing between the star and the telescope. The chemical composition of the planet’s atmosphere can be revealed by analyzing how the light changes when the star dims.

However, this strategy only works for planets whose orbits happen to pass between their host stars and Earth. In a new paper, researchers flipped that formula on its head, asking: Which nearby stars are lined up properly for their inhabitants to see Earth transit in front of the sun? Would those star systems’ life-forms be able to detect signals from us, the living things on Earth’s surface? It turns out that the answer is true for a large number of nearby stars.

“If observers were out there searching, they would be able to see signs of a biosphere in the atmosphere of our Pale Blue Dot,” Lisa Kaltenegger, a Cornell University astronomer and lead author of the paper, said in a statement.

Planets, it turns out, are relatively common in space. Since the discovery of the first transiting planet in front of its star in 1992, astronomers have discovered 4,292 confirmed planets beyond our solar system, circling 3,185 stars, largely thanks to the planet-hunting Transiting Exoplanet Survey Satellite (TESS). The James Webb Space Telescope (JWST), which is set to launch later this decade, will have the precision to investigate several of those planets in greater detail, potentially detecting chemicals like methane or oxygen in their atmospheres, which would be likely signs of life.

What if aliens had their own JWST? The researchers discovered 1,004 vantage points to see Earth within 326 light-years. 508 of them have viewing angles that would provide them with at least 10 hours of observational data every time the Earth passed between that location and the sun – excellent conditions for spotting this small rocky planet and signs of life in its atmosphere.

“Only a very small fraction of exoplanets will just happen to be randomly aligned with our line of sight so we can see them transit.” said Lehigh University astrophysicist Joshua Pepper, co-author of the paper, in the statement. “But all of the thousand stars we identified in our paper in the solar neighborhood could see our Earth transit the sun, calling their attention.”

According to the researchers, about 5% of the 1,004 stars are likely too young for intelligent life to have evolved, even if a planet with habitable conditions orbited them. However, the remaining 95% belong to star categories that can sustain life for billions of years, which Earth’s experience says is long enough for intelligent life to evolve if conditions are good.

Because the zone where Earth’s transit is seen decreases as you go closer to our solar system, the bulk of the stars on the list are at the far end of the 326 light-year range. The nearest star on the list, however, is only 28 light-years away. And there are several more nearby stars that are on track to enter the zone where they might spot Earth within centuries. Some are bright enough in the sky to see from Earth.

Two of the stars on the list are known to have exoplanets. And Teegarden’s star, a red dwarf 12 light-years from Earth with known exoplanets, does not currently have the correct viewing angle to notice Earth but, at its current pace of travel, will enter the Earth-spotting zone as soon as 2044.

The next stage, according to the researchers, is to direct intelligent life-hunting efforts towards to the 1,004 stars found in their report. They especially referenced SETI’s Breakthrough Listen program, which is aimed at discovering advanced alien civilization communications.

This research was published in the journal Monthly Notices of the Royal Astronomical Society.